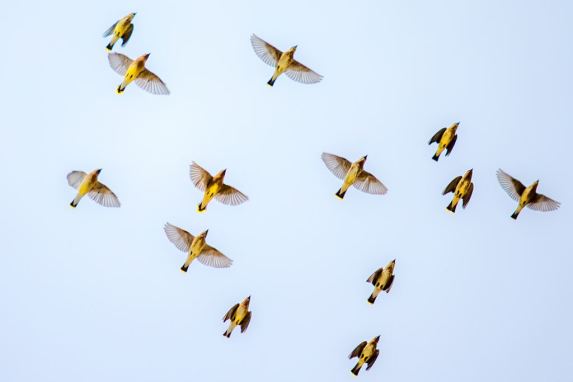 By Design: An Architectural Awakening Could Save Billions of Birds

By Design: An Architectural Awakening Could Save Billions of Birds

As many as one billion North American birds die each year in after colliding with windows. Innovations can help them steer clear.

With its lush, tidy plant beds and outdoor benches, the office compound in Markham, a suburb of Toronto, seemed park-like on a mid-July morning. Ontario had little rain this summer; forest fires raged in provincial parks. But the trees, shrubs, flowers, and lawns of this corporate campus were damp and green. Michael Mesure stood in the center of the complex, taking stock. A few months earlier, the property manager had asked him for an assessment. “When a building contacts us, it is because there are dead birds in front,” Mesure said, pointing to a glass façade that mirrored the verdant canopy. “The birds move from tree to tree gobbling up insects, and unbeknownst to them, the tree they are flying toward is the one they just left.”

Mesure, cofounder of the nonprofit Fatal Light Awareness Program (FLAP), set off behind one of the buildings. “It is a perfect storm here,” he said, “because of the beautiful landscaping and a nearby river and swamp.” He suspected that the back might kill more birds than the front, and it seemed quite possible: Those walls reflected even more vegetation and a largely uninterrupted swath of sky. The looking-glass land appeared idyllic and inviting, a rich habitat. “I can guarantee that this is a much more lethal façade,” Mesure said. “But the birds fall into the bushes and no one sees them.” At many sites, FLAP volunteers discover a cuneiform of tiny white bones in the dirt.

Mesure has been circling buildings in and around Toronto since 1989, saving injured birds and counting the dead. He is credited with launching what became, in the late ’90s, a growing movement in North American cities along migratory flyways to reduce the estimated 100 million to 1 billion bird deaths caused by collisions with windows every year. FLAP, formed in 1993, initially focused on light emanating from buildings at night, which can disorient birds; it now focuses on windows, which kill more birds and at all hours. Because of FLAP’s efforts, Toronto is seen by many in the ornithological community as a model of a city that does right by birds: In 2007, it was the first to produce bird-friendly green-building guidelines; since 2010, developers receive building permits only if design specs consider bird safety; and several older properties have been retrofitted to reduce bird strikes.

"A Canadian Wildlife Service biologist, De Groot has been evaluating small white dots called Feather Friendly markers at the federal Pacific Wildlife Research Centre in Delta, British Columbia. In the two years before the center was retrofitted, she and her colleagues recorded 53 deaths from window strikes; since dots were applied in 2016, only four."