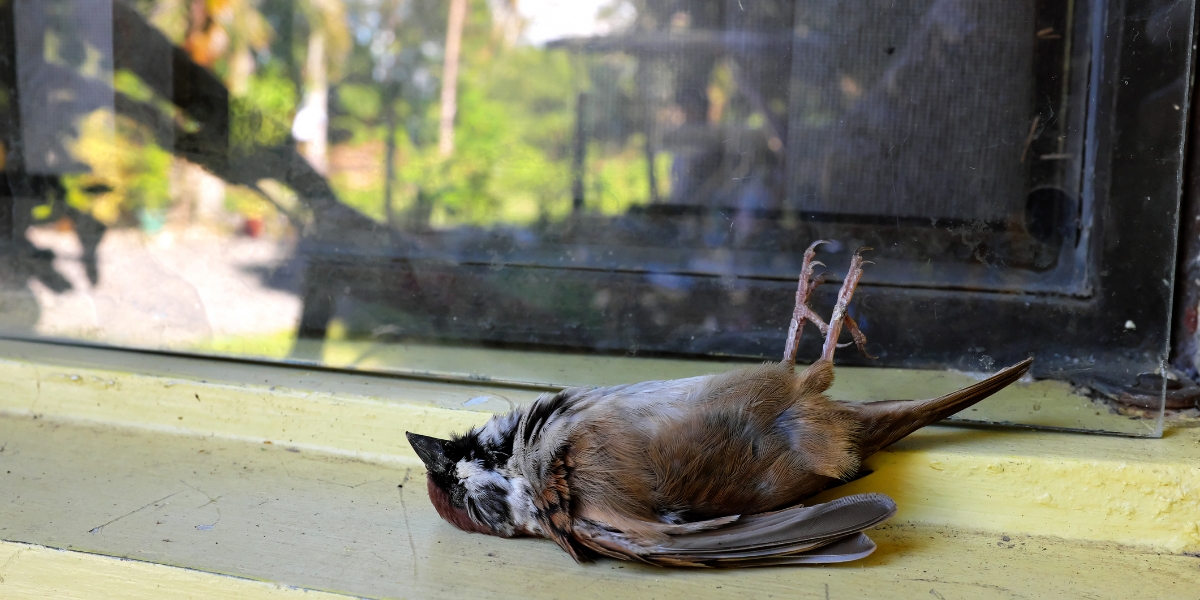 What happens to birds after a glass collision?

Each year in North America, glass collisions take the lives of 1 billion birds.

This startling statistic may leave you with several questions like, why do birds collide with glass in the first place? What happens to them after? And what should I do if I find an injured bird? In today’s blog, we’ll be exploring the answers to these questions.

The most common collision problem for birds. By reflecting foliage or sky, glass surfaces mislead birds into thinking it’s a real part of their environment and thus many consequently collide into them at full speed.

Collisions also occur when birds attempt to reach open spaces, habitats, or other attractive features that are visible through either glass surfaces or free-standing glass. And because the number of glass facades is so great, the toll they take on avian species is excruciating.

Unlike reflection, fly-through zones show habitat that really does exist on the other side of the glass. The bird does not realize the physical barrier that separates it from the area that lies beyond.

What About Light, Does it Cause Collisions?

While light can cause an increase in collisions, it is not a direct cause. Recent studies demonstrate that light from urban areas attracts birds to human-built environments, where they then experience a higher risk of falling victim to glass collisions.

Migratory birds travelling at night, specifically, are mesmerized by artificial lights, which appear in deep contrast to the dark night sky. Referred to as the “beacon effect,” this occurrence can be caused by powerful light displays, lighthouses or offshore oil platforms.

Artificial lights also interfere with seasonal bird behaviours such as breeding, nesting, and migration rituals. As Dark Sky points out, many bird species are dependent upon seasonal lighting cues to inform their migratory behaviours.

The presence of artificial light often causes birds “to migrate too early or too late and miss ideal climate conditions for nesting, foraging and other behaviours.” Due to the disturbances caused by artificial light, many species will suffer from inadequate food and shelter which ultimately affects their ability to reproduce and survive.

When Do Most Collisions Occur?

While collisions can happen at any time year-round, they are found to be the most frequent during migration periods when large amounts of birds move between their breeding grounds and their wintering grounds. In fact, glass collisions are usually the highest during fall migration, when travellers include both adult birds and their offspring. This isn’t to say that fall is the only dangerous season. Collisions also demonstrate an increase in late spring, as nesting birds care for their young, and in winter, when resident birds depart from their territories and cover larger areas in search of food.

In terms of the time of day, most glass collisions occur during daylight hours or immediately before dawn. Mornings, in particular, are one of the worst times of day for collisions, especially during migration. This is because migratory birds have just travelled all night and are in desperate need of a place to land and refuel. The species that touch down in or near city centres unknowingly find themselves at high risk of colliding with glass.

What Happens After Birds Collide With Glass?

Most of the birds that collide with glass are travelling at speeds high enough that they almost always die on impact, or soon after as a result of their injuries. Even if they manage to fly away, more often than not, the injured bird will succumb to injuries like internal bleeding, concussions, broken bones or bruising, especially on the brain.

For birds to survive in the wild, they need to be in the best shape possible. If they’re unable to fly or exhibit other impairments, they could become easy prey for other wild animals or someone’s pet cat. What’s more, many of the birds that collide with glass are in the middle of migrating and thus may still have to travel thousands of kilometres to reach their end destination.

Even birds who appear unhurt may be masking severe injuries. Injuries may also worsen or develop without medical treatment. For example, birds often require anti-inflammatories to reduce the swelling in their brain, medicated eye drops for corneal ulcers, which are painful abrasions on their eyes, and pain medications for bruises or lacerations on their body. Some will also have fractured bones or beaks, which will require ample time to heal, requiring them to stay at a local rehabilitation facility for several days or weeks.

Taking them to your local wildlife rehabilitation facility, even if they only appear stunned, then, is the best course of action. There they can provide appropriate care while keeping the bird out of harm’s way.

What Happens to Recovered Birds?

Once birds are deemed strong enough to return to the wild, they are released. But are they able to survive and migrate as usual? Unfortunately, the answer to this question remains unknown. But scientists from Powdermill Nature Reserve partnered with FLAP Canada and other organizations in a multi-year study to find out.

This past fall, trained FLAP Canada volunteers and researchers in Toronto equipped birds that survived a glass collision with a nanotag, a lightweight tracking device that allows scientists to follow their movements over vast distances.

As the bird travels, the nanotags emit a unique pulse every 10 seconds, which allows the towers to identify the bird when it’s within range. This information is then logged into The Motus Wildlife Tracking System and scientists are able to see how glass collision victims fare after recovery.

While to date we have some inclination on which avian species are most at risk of glass collisions, collecting accurate data to assess the quality of life of rehabilitated birds will take time, effort, and resources. Although we have yet to understand the long-term effects that these collisions have on birds, the Motus System has proven to be an excellent tool for locating previously tagged birds that require assistance. In fact, FLAP Canada’s innovative use of technology, and ongoing commitment to bird safety, has helped many birds recover from collisions.

Why Don’t I See Birds That Have Been Killed by Collisions More Often?

Don’t be fooled by the fact that you haven’t seen or heard a collision at your home or office. Most collisions don’t occur in plain sight and often go unseen and unheard.

Birds are flying at high speeds and as a result, they may bounce off the glass and land a fair distance away. If they do land in open spaces, it’s not long before custodians and homeowners sweep them up.

Animals also quickly dispose of dead birds. Invasive species like cats, rats, and raccoons will run off with dead or injured birds soon after spotting them, and some may even check areas susceptible to glass collisions several times a day for victims.

What Should You Do if You Find an Injured Bird?

The faster you get help from your local wildlife rehabilitation facility, the better chance the bird has at recovery. Injuries like broken bones usually need proper attention within minutes or hours to heal properly without surgery.

If you’ve found an injured bird, follow the steps below and contact your local wildlife rehabilitation facility immediately.

How You Can Help Prevent Glass Collisions

According to the American Bird Conservancy, In less than a single human lifetime, 2.9 billion birds have been lost in North America, across every ecosystem. Among the billions of birds lost, 90 percent came from just 12 bird families, including sparrows, warblers, finches and swallows. These common species play influential roles in ecosystems. If they’re in trouble, we too are in trouble.

These findings were reported in the world’s leading scientific journal, Science, by researchers at seven institutions, including the American Bird Conservancy. Although this study specifically didn’t investigate the causes of this crisis, scientists have identified that the second leading human-related cause of death for birds continues to be reflective and transparent glass collisions.

Reversing this massive decline takes action on all fronts. If you’re ready to help, here are several things you can do to get started:

Safeguard Your Home and Yard

Simple adjustments can be made to your home and yard to help local and migrating birds. Here are a few examples:

Turn Your Lights Out

Across North America, there are several Lights Out Programs that aim to keep migrating and local birds safe. Each campaign includes several steps companies and individuals can take to reduce nighttime glass collisions. Turning off or dimming non-essential lighting from 11 p.m. to 6 a.m. during migration periods, investing in automatic or motion-censored lights, and directing lights downwards, are just a few of the strategies that can be implemented.

These initiatives have already proven successful in reducing bird collision rates. In fact, the City of Chicago reported that since beginning their program, “Chicago’s tall buildings in the Loop have served as an example to the nation as they save 10,000 birds’ lives annually.”

Rescuing an injured bird is a great place to start. But that’s not all you can do to help the avian population. Interact with agencies, experts and community members and advocate for bird conservation in your community. Spread the word about how you keep birds safe. Remember, no act is too small!

While the above actions are great places to start, one solution reigns supreme– our deterrent markers.

Our Bird Deterrent Technology is a simple solution that positively impacts bird conservation, and we have the evidence to back it up. According to a recent study, Feather Friendly®

Since 2006, we have installed over 6 million square feet of glass, saving important biodiversity for generations to come. Built for durability and longevity, each of our solutions is tested and approved by the American Bird Conservancy and Dr. Daniel Klem Jr., as well as supported by the National Audubon Society, FLAP Canada and others.

We’d love to help you with your next project. Contact us today to discuss our residential and commercial solutions.