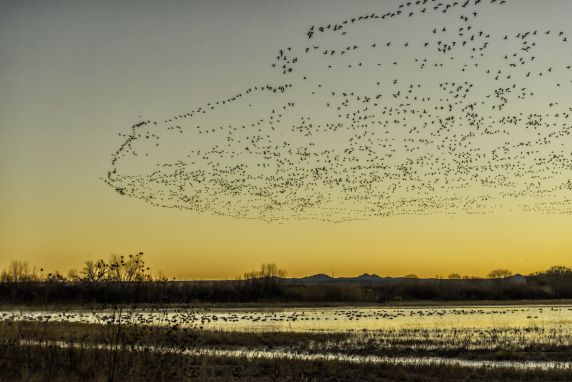 Bird-Friendly Initiatives that are Making Flyways Safer for Migrating Birds

Billons of birds will use flyways across North America to navigate south, or north, depending on the season. The term “flyways” refer to the paths that birds use to travel to and from their summer breeding grounds and winter territories; the flyways extend across continents and even over oceans!

However, migratory birds will face many threats as they make their journey south for the winter. In addition to fighting fatigue, predators and unfavourable weather conditions, bird must contend with man-made structures that dominate most of the flyways.

Brigit Katz, writer for the Smithsonian Magazine, notes that because “bird species make their migrations at night, and they are attracted to the glow that emanates from buildings,” light pollution is one of the main causes of bird fatalities. Artificial light has the potential to disorient birds, which makes it increasingly difficult for them to manoeuvre through an unfamiliar metropolis.

Luckily, there are many ways to reduce, and even eliminate, bird-building collisions, several of which have been incorporated into conservation efforts across North America. Although most birds migrate somewhere between April and September, we can all do our part to make flyways safer for birds year-round.

Which Cities Pose the Biggest Threat to Migratory Birds?

In a 2019 study published in Frontiers in Ecology and the Environment, Cornell University researcher Kyle Horton and his team collected and analyzed satellite data to identify which American cities posed the greatest threat to birds.  The following table[i] uses a scale of 1-10 to indicate how dangerous these American cities during spring and fall migration:

So, what can we gather from the data provided to us from Cornell’s research? Well, according to Kyle Horton, the bird mortality rates in Chicago, Houston, and Dallas reflect not only their status as highly populated cities, but also their unique position “in the heart of North America’s most trafficked aerial corridors.” These three cities are situated within the Mississippi and Central flyways respectively, which are used by many birds, including hummingbirds, warblers, grosbeaks, and other priority species.

And it’s not just the cities and municipalities within the United States that fall into flyway territory: in Canada, major cities like Toronto and Ottawa are positioned closely to both the Atlantic and Mississippi flyways, which cover many states in the U.S. and extend up to the Canadian provinces of Ontario, Prince Edward Island, Nunavut, Quebec, and beyond.

What Can We Do to Reduce Bird-Building Collisions?

Luckily, there are several initiatives that can be, and already have been, introduced to help reduce bird-building collisions. And, best of all, many of these bird-friendly strategies are simple, affordable and can be practiced at your home or office!

1. Participate in a “Lights Out” Program

In 1993, FLAP Canada became the first organization to publicize the devastating effects that lights can have on local and migrating bird populations. This growing awareness of the effects of light pollution prompted other organizations, like Audubon, to establish Lights Out programs in cities across Canada and the United States.

According to the FLAP Canada website, there are now approximately 38 cities across North America that participate in Lights Out programs. The Lights Out program uses simple recommendations to reduce bird collisions: large skyscrapers and offices are encouraged to shut off all lights that are not being used at the end of the day.

Turning out lights will assist birds in finding their way and helps citizens raise awareness amongst the community. Your participation will encourage others to adopt similar practices.

Have you noticed a bird collision or an increasing number of them at your office or home? On October 5-11, you can join FLAP, and other participating conservationists, for Global Bird Rescue (GBR) by logging your data into the Global Bird Collision Mapper, which will assist scientists and organizations in identifying and reducing bird deaths on a global scale.

3. Use Feather Friendly® Bird Deterrent Markers on Your Windows

Installing Feather Friendly® markers on your windows is proven to significantly reduce deadly window collisions. Although most birds migrate outside of daylight hours, applying window markers will greatly reduce collisions that occur during daytime, since daytime reflections are one of the leading causes of window collisions in the world.

Even if you live in a bungalow or residential area, your windows are just as lethal as the windows on skyscrapers. Feather Friendly® window markers are designed for easy installation and will stand up to a variety of weather conditions for many years. Check out our solutions for both commercial and residential applications!

Migrate Toward a Solution this Winter with Feather Friendly®

By incorporating bird-friendly practices into your routine, and outfitting your windows with bird deterrent window markers, you can help prevent deadly bird collisions in your area. Advocate for Lights Out programs and connect with local government officials to help keep skies safe for our avian friends.

Migrating birds will travel approximately thousands of miles each year – while they’re making their journey towards sunnier skies, you can start your own journey by making your home and business bird-safe by ordering our DIY Tape kit online or browse our website for additional resources!